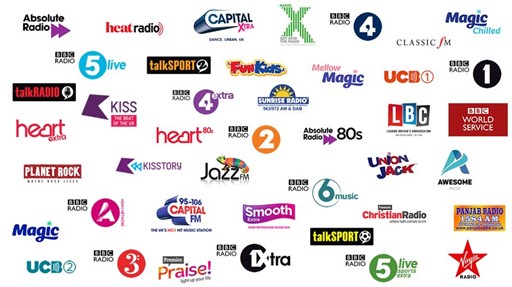 Imagine a format aimed at kids, one at tradesman and another playing only UK artists. These are a few of the new formats available to UK radio listeners due the proliferation and adoption of DAB radio.

DAB was first introduced in the United Kingdom in 1995 and today DAB radio listening accounts for 42% of the total radio listening according to RAJAR audience figures Q1 2020. Radio listeners have over 450 stations to choose from on DAB including a total of 55 offerings from the BBC and over 400 commercial national and local services.

Beyond finding your favorite FM station on DAB, the commercial networks have created multiple brand extensions for DAB, for instance, KISS, a national Dance CHR, has Kisstory, an Old School Dance channel. Today, Kisstory is the second most popular and leading digital commercial station with 1.5 million listeners on DAB. Global, the UK’s leading commercial broadcaster, has created dozens of new channels too, including a number of sub channels for the nation’s leading commercial network – Heart. Heart 70s, Heart 80s, Heart 90s and Heart Dance are a few Global’s stations heard exclusively on DAB.

Not to be outdone by the commercial players, the BBC has also conceived DAB only formats and a number of Pop-Up channels that come and go. Examples of past Pop-ups include an Olympics’ station, a Eurovision Song Competition channel and a Beatles channel which was launched to celebrate the 50th Anniversary of the Abbey Road Album.

Yet, it’s the outliers, serving previously unimaginable niches with their low-cost operating models that have created the most innovative and interesting DAB formats.  And these new listening experiences are generating more interest and listening to radio.

If you have an underachieving station under your watch, looking beyond the traditional format options could be the key to success. The UK DAB operators have proved new formats targeting previously unserved niches can result in loyal, passionate fan bases resulting in new monetization possibilities.